Hi everyone!
I finally got #1-an adapter and #2-the internet to work! Hooray! So I was going to be emailing everyone once a week to recount my adventures and then Mike suggested that I just blog everything which saves some headache and makes it nicer because I can easily include pictures! So I'll catch you all up on the days that you missed.
Day #1: Thursday/Friday Sept. 1st
This was a LONG plane ride since I've never flown outside the US before. Almost 8 hours of trying to sleep and not being able to. My flight left at 5:30PM Thursday and I arrived in Manchester, UK at about 7:15AM. I met a girl named Laura on the plane who is going to study in France and we also sat by an English guy named John who talked like Shrek. 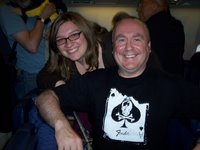 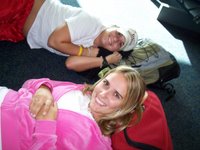 It was cool. Then in the UK I had also talked to 2 other girls who are going to Spain 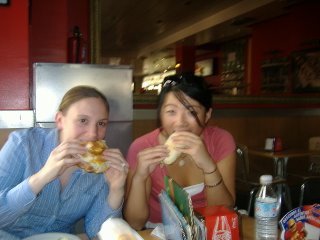 and we all waited for our flight which was supposed to leave around 8:30AM and we still didn't even have a gate number at 8:30AM. So we finally got our flight about an hour later making me late to meet linda at the airport in Madrid. Linda was still there though because her flight was late. We took a 30euro cab to our hostal which is EXPENSIVE. We met Alcyn and went to get some food because we were STARVING! We went to a cafeteria and I got the specialty sandwich which had asparagus and eggs and it was weird but pretty good. 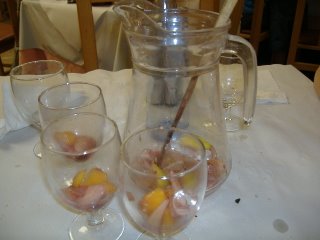 After that there was some wandering and hmmm. I hardly remember anymore. We did try to find a kiosk that has the "classifieds" SegundaMano for finding pisos (apartments) but this day we weren't successful (day 2 we are). For dinner we went to a restaurante whose name I don't remember right now but I had the menu del dia which is basically in restaurants here for like 8-10 euro you get like an appetizer (gazpacho-cold tomato soup-is what i had) an entree (garlicky chicken w/ "french fries") and a desert (tiramisu) a drink and bread. It was a pretty good deal. We also had a pitcher of sangria (6 euro which is a pretty good price) which was amazingly good. We didn't go "out" because we were just so exhausted but we got a good night's sleep for day #2 which I will finish typing about later tonight. I love you all very much and will talk to you soon! Hasta luego! (See you later!)
Aly
Aly D at 7:12 PM
Share